Are You Banned From Your Minecraft Server? Get Unbanned this way

Well, since you are already here reading this post on finding out the reasons to why you might have got banned from Minecraft servers as well as solutions on how to get Unbanned to the server which was dearest to you. Now, most people do not understand the pain of losing out on a server or to simply get banned from it.

They would just come up to you and say, “Well you could always get yourself into a new server and start playing as usual”, “What is there to cry about?” and the most annoying of all “It is just a game.” But, whatever these people may say to console us, it never actually works.

The pain of losing entry into a server is not only limited to the feeling of being left out, but actually it is feels more or less like a part of you is lost. All those great sculptures you had crafted, all those magnificent buildings you had build to all those cool friends you had made in the World of Minecraft may all seem to just perish with a single “Ban”.

And to make things even more worse, there are times when you get Banned for no good reason at all. Things as simple as asking even a stupid question or dressing up as someone can also result in getting banned.

Also, I am pretty sure many gamers may not have even the slightest of idea of what are such things which can get oneself banned. Thus, in order to stop such incidents from having in the future and depriving other unaware souls from facing such incidents in their mere future, I have tried to not only list out ways on how to get Unbanned from a Minecraft server but also ways on how to get Banned from Minecraft servers as well. Just so, that you do not go on making the mistake in the very first place.

What Does Getting Banned Mean?

Well, getting banned from a Minecraft Server basically means you are not permitted entry into that realm. You will most probably loose all your progress inside the realm forever, and there is nothing much you could do about it anyways.

And even if you did manage to be back inside the server your were banned from, there is a very high probability that you will find nothing to be the same. Since, the game is always changing at a drastic pace at starting at where you left would just seem like an impossible task to achieve there. 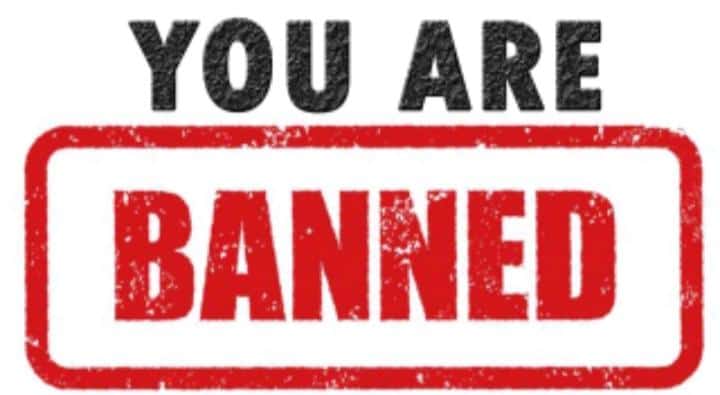 However, apart from just getting banned from a particular realm and their service, there is no other harm done. You could still join other realms, play with friends as well as build on your new life their.

But, then again the only thing you must remember and manage not to repeat is get banned. And thus, with that said I believe the below listed out Not to do and To do, to get Banned and Unbanned might help you out on your journey a little in your world of Minecraft for the coming years.

How To Get Banned From A Minecraft Server?

Now, before we barge into the part where we learn how to get ourselves Un-Banned from a particular server. I believe first we should have a look at all the ways which would lead to someone being banned in the first place, cause you know what they say, “Precaution is always better than cure”.

So, basically the very first thing you must understand about things not to do when inside a Minecraft realm mainly of three types or maybe fall under three major types.

And although, these look like pretty general rules to go by and abide, trust me they have some really complex issues engraved deep down within each one of them which even further increases the chances of you getting kicked out and banned from a server, without you even knowing what you did wrong.

Anyways, let us just look into each type of rules further more in detail, just so you understand well the crux of all the types well enough so that you are well cautious and aware of what you can do and what you should stay away from doing while your stay in a realm.

Firstly, when we speak of “not grieving”, it basically means that one should not go all wild and destroy whatsoever that comes his or her way. You cannot go on rampaging and damaging buildings and structures made by other players without their permission to do so.

Hence, even if you break one single block of another player’s building, then you have a 99.9% possibility of getting banned by an admin or even an operator if desired.

Secondly, I believe many of you already may know about what spams can look like in the world of gaming or simply in the Internet. So, if you are found spamming other players or servers in any way, you could very well get easily banned from that particular server without much hassle.

Hence, it is advised you to not post or message any player with texts or messages which may seem like you are trying to spam.

Thirdly and most importantly, please try not to cheat. Now, I know very well that something like using a mod to enhance your gaming experience may always seem like one of the most lucrative desires out there.

And, possibly many players or users in a realm will be using some or the other kind of mod to gain an advantage over other players. Still, it is important or crucial even to know where to draw the line even while using a mod. If you think a small mod you are using does not harm the purpose of playing or anyone else in the realm, then I guess there is no harm using one.

However, if a particular mod is so powerful that it defies the very law of a particular realm and make other players seem like puny pawns, then surely you will get noticed and may get banned right away.

So, basically if you are caught of using any elusive way or simply cheating in a realm which catches the eyes of admin and other players, then you have a good chance of getting banned from the server by all means.

Apart, from these three primary rules, certain other things like dressing up as “trump” or simply calling out racial slurs, that may offend a community or sound and look non-ethical can also prove to be a good reason for an admin to ban you from a particular server.

Being said all of that, however if your question specifically asks whether you are Banned from your very own Minecraft Server or not. Then I believe that too is very much possible, if there are other admins in your server or you had made them admins of your particular servers.

And unless, you make any other admins for a particular server you own, I believe no one could actually ban you from it since you are the sole proprietor of that particular server. But, that still does not mean you could misuse your power, since consequences are always there for any bad karma you do.

How To Get Unbanned From Any Minecraft Server?

Well, if you decide to follow all the rules mentioned above, then I believe in the mere future, you will never have to come to this section ever again. However, it is important to note that there may be other rules too which may differ from server to server.

Something which may look wrong in one server can actually be fine for some other server. Hence, it is important and also advised that before you join any server, you first have a look at the rules and regulations listed for that particular server by following their official website or forums related to it.

But, if you are already Banned from a particular server and desperately are in need of going back to your old life and hanging out with friends, then I believe by following the steps given below you should be able to get access again to the respective server.

So, it just takes a well written plea sent to the right place in order to get approval. If you can do that well, then you will find yourself inside the particular server of your choice. And if not, then I believe you will be in search of another server that suits your needs.

But, trust be that is not the end of your “Minecraft life”. There are tons of awesome servers out there to be explored and starting a new life although may seem rough many a times, always has a different taste to it. Hence, even after trying out the above solutions if you don’t make it in. Do not get upset. Simply move on and explore.